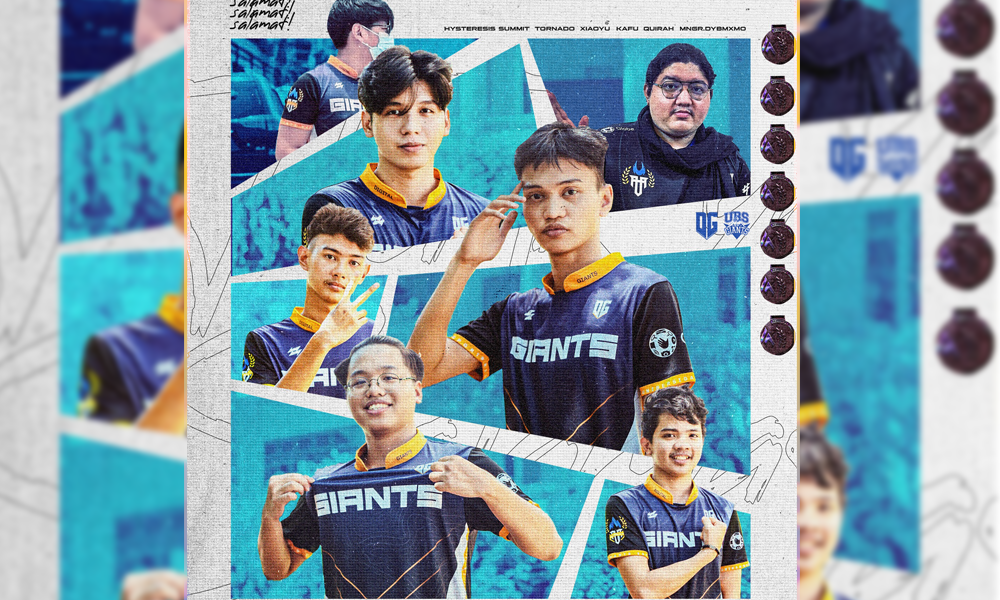 AcadArena’s Alliance Games League of Legends: Wild Rift tournament saw a lot of upsets and celebrations on the first day of the playoffs round last Friday, November 10. The first day saw a whopping four full matches between the top 8 teams. Three out of all four games ended with a sweep, with the match between the University of Rizal System Digital Giants (DG) and Pamantasang Lungsod ng Manila Haribons Ionos (HAR) being the exception. 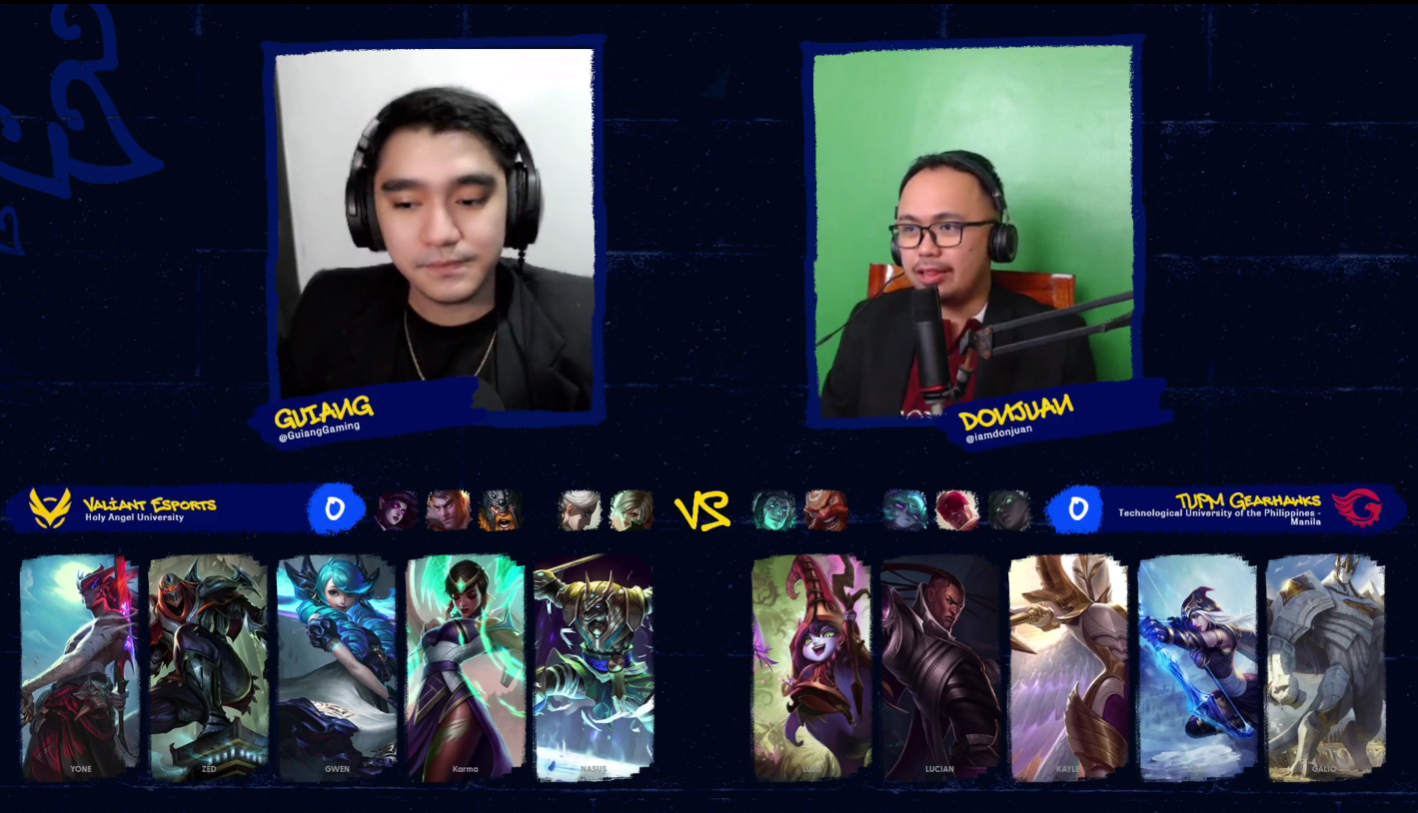 The first series was a match between Holy Angel University Valiant Esports (VE) and Technological University of the Philippines Gearhawks Esports (GHX).

GHX opened the series with a funnel strategy in the first game, with Marvin Noah “Marzumi” Lansangan playing Lulu in the Baron lane, and Bryll Cristian “bitter end” Hernando playing Kayle in the Jungle. This composition looks good on paper, centered around Kayle’s hyper-carry potential if given enough experience.

However, it looked good on paper only. The team would meet their bitter end at the hands of VE in the first game. VE fielded an aggressive composition, running Gwen in the Baron lane, Zed in the jungle, Yone in the mid lane, and a dangerous duo of Nasus-Karma in the Dragon lane for Chino “Shino” Engallado and Ian Kyle “Kome” Reyes.

VE’s first-game momentum didn’t end after their first win against GHX and continued to soar high and ultimately take game 2 to comfortably make their way into the next round.


Tamaraws cause mayhem in the rift Far Eastern University Institute of Technology TEC Mayhem (8TEC) brought the house down against Lyceum of the Philippines University Manila (LPE) for the day’s second series.

LPE started the game strong, picking up the first Rift Herald of the game and taking control of the map early on. However, their early game lead soon disappeared as 8TEC picked them off with every skirmish. A crucial clash in the Baron pit gave the buff to 8TEC’s side, causing them to regain control and gain momentum in the later stage of the game. The tamaraws took game 1, and shortly after, a one-sided game 2. The tamaraws trample the pirates in a stampede. 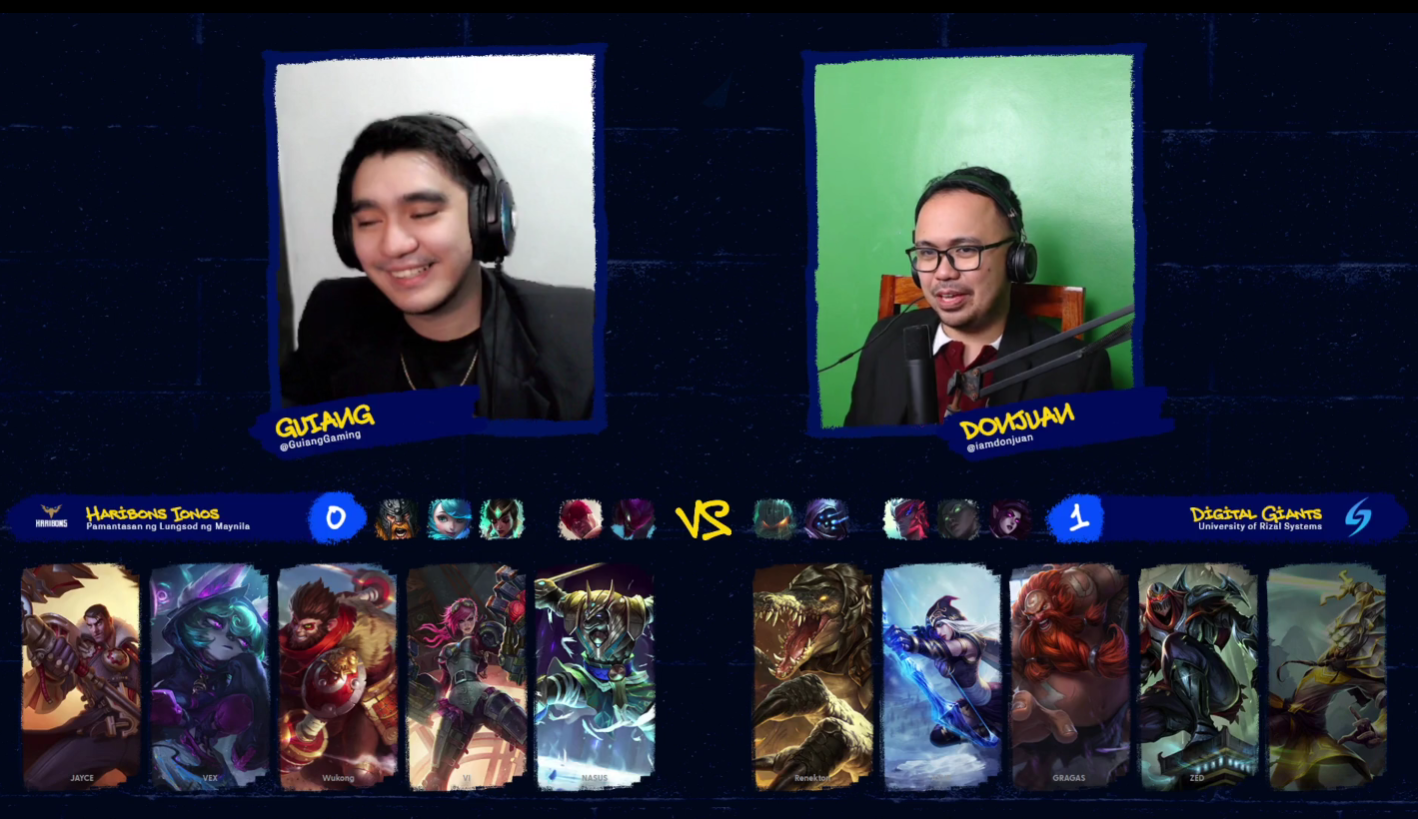 HAR kicked off game 1 with a bruiser composition— Fiora, Renekton, Riven, Gragas— and an AP carry Vex for Syrus “juiSy” Viscayno. Meanwhile, DG went for a scaling composition, with Lee Sin in the jungle to allow for ganks in the early parts of the game.

An early clash near the Baron pit wiped out four of DG, allowing HAR to take an early gold and level lead over them, and consequently taking the Rift Herald.

DG managed to secure the mid-game, slowly picking off HAR and ratting away at objectives. A crucial fight in the Elder Dragon pit aced HAR, causing DG to head straight and win the first game despite being 2 inhibitor turrets down.

HAR isn’t one to back down, however. They once again stuck to their bruiser-heavy pick with a Vex AP carry, while DG focused on burst champions like Zed and Fizz, and an Ashe for vital DPS.

HAR snowballed into the mid-game after a clash in the Dragon pit, but DG quickly regain momentum to even the playing field. The game’s balance is now even, with a crucial teamfight needed to tip the scales.

HAR’s Augusto “Ulan” Caguiat III led the team to victory, with his ultra-instinct plays melting away DG. With the series now tied 1-1, both teams feeling the pressure.

Digital Giants opened the final game with a burst composition, while Haribons Ionos went wth a bruiser lineup. This bruiser-heavy lineup defined the meta of the playoffs. Teams would pick bruiser champions like Renekton and Sett for the solo lanes, then pick a burst damage AP carry and/or jungle and an enchanter or crowd control-heavy support.

DG took control of the early game, taking objectives and map control while keping up a gold lead. With their teamfight-focused lineup, objective contests are easier, allowing them to take an early Rift Herald to take down the first turret. This allowed them to snowball towards the mid-game, keeping the momentum on their side.

Excellent macro plays from DG allowed them to take down the Dragon lane inhibitor turret, opening up HAR’s base. Unable to leave their base unattended, HAR were unable to contest any objectives that DG took, further extending the gold lead.

A triple kill by juiSy allowed HAR to slow down DG’s attempts and buy them some time. However, DG’s fed champions managed to retaliate in a Dragon lane clash, wiping out four of HAR. With that, it was easy to charge their Nexus down and end the game. DG win the series after a nail-biting set of matches, 2-1. 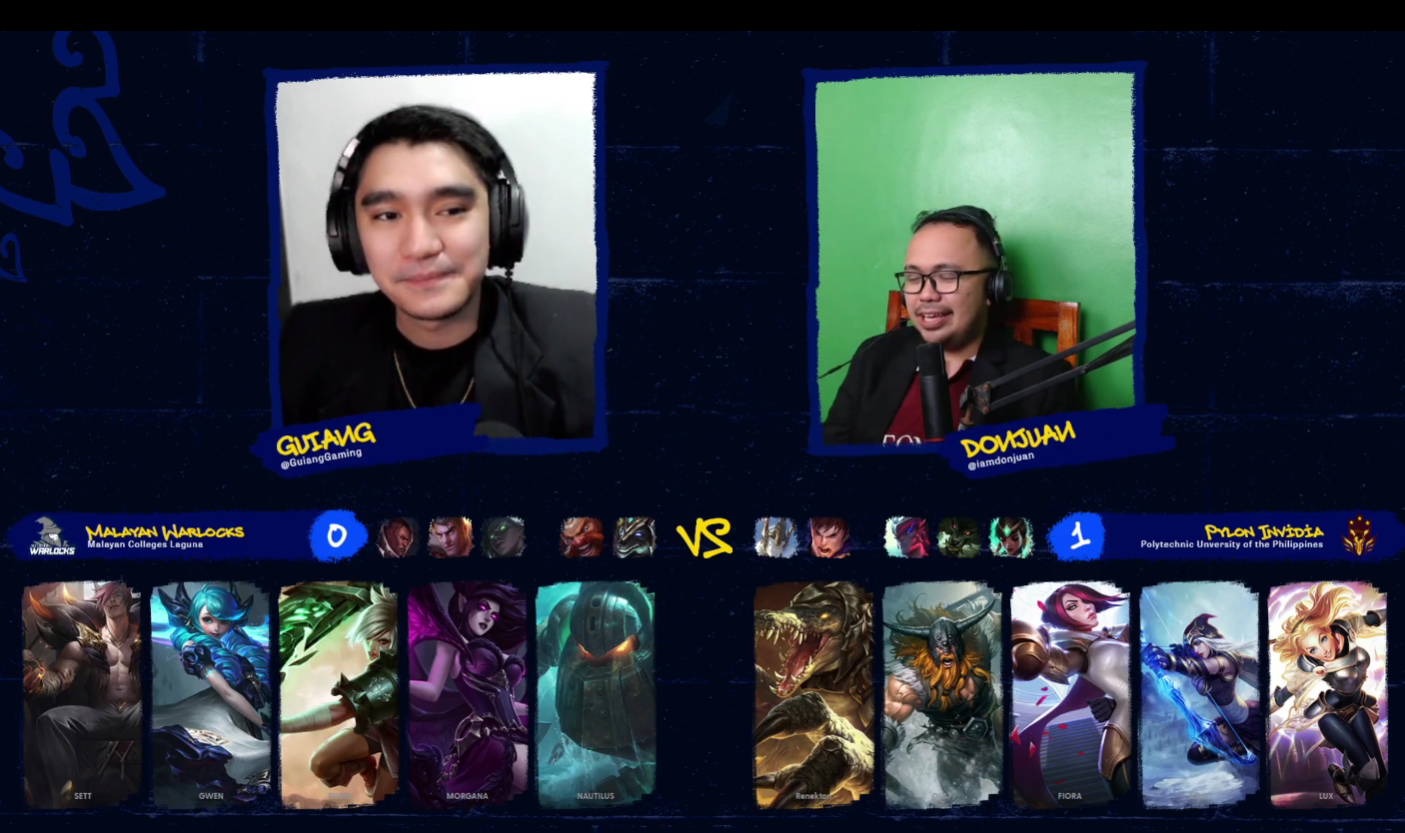 The last series of the game was between the Malayan Warlocks (MW) and Pylon Invidia (PI). Both teams went with bruiser-heavy compositions and one or two burst champions.

MW managed to take the first three kills of the early game during a clash in the Dragon pit, pushing their gold lead a little. However, Pylon Invidia start to play the objectives game, slowly picking fights around important objectives to force a contest. With their teamfight and burst-focused bruiser lineup, PI manage to take the momentum on their side and control the mid-game.

A clash during the third Dragon take wiped out the Warlocks, leading Pylon to redirect their attention to MW’s turrets and take game 1.

Game 2 saw both teams centering their lineups around bruisers, solidifying the bruiser meta running this tournament. Pylon Invidia took control of the early game by picking off the Warlocks slowly. This allowed them to take up the momentum and drive their way to an early lead. Pylon Invidia manages to take more unanswered kills and won a crucial clash during the first Drake take.

Pylon Invidia’s early snowball lead made it impossible for the Malayan Warlocks to bounce back. The series ended in a sweep in PI’s favor, closing out the first day of the playoffs. 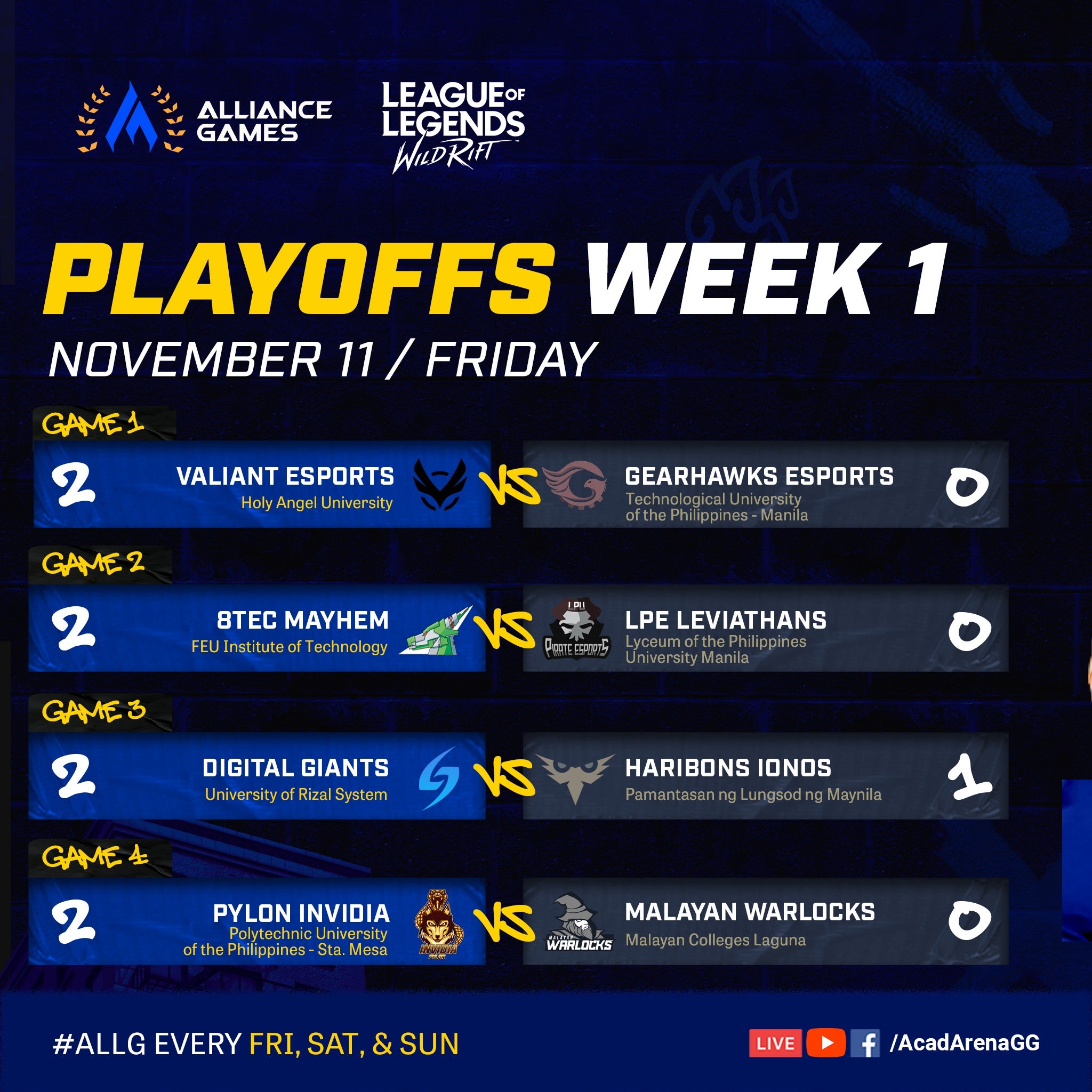 The next round of games will be played this Friday, October 18 starting at 4PM PHT. Catch them live at AcadArena on Facebook.